Move to iOS App is designed in the spirit of all-or-nothing transfer. It works only if you want to move Android content to a new iPhone, as opposed to an iPhone that you used for some time, with content on it, and you have no intention to erase the content.

To initiate Move to iOS, you have to reach the App & Data screen on iPhone, and to reach the App & Data screen, you have to erase iPhone. It is designed in this way, so that even if you can select whether you want to keep contacts, or photos in Move to iOS, it is not the right way to ADD photos from Android to an iPhone with content that you don't want to erase.

If you have a brand new iPhone:

Step 2. Power up your new iPhone, follow the instructions to set up iPhone until you see this App & Data screen. Choose Move data from Android.

Step 3. Tap continues on both devices, and enter a 12 digit code when you are prompted.

If you have a used iPhone:

If you want to keep all the data on iPhone, and at the same time import Android photos to iPhone, use one of the following methods instead.

Transferring photos from Android to iPhone over the air could be broken sometime. Users constantly complain that Move to iOS app won't work, or not all photos get transferred. Against the momentum of wireless transfer, a computer is still the most stable and time-saving way to transfer large quantities of photos at full resolution.

Once you have moved photos from Android to a computer, DearMob iPhone Manager can help you to transfer these Android photos to iPhone easily and safely, without erasing existing data on iPhone. 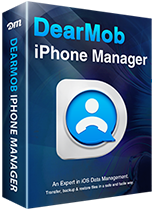 USB connect your Android phone to a Windows computer, choose the right mode depending on your specific situation:

Step 2. Copy photos from Android to a computer.

If you select PTP on your Android, you can simply import photos. If you prefer to view folders and manually copy or move photos, you can go to following folders depending on your photo type/source:

Now that you have everything prepared on a Windows PC or a Mac, you can use DearMob iPhone Manager to transfer photos to iPhone.

Extended reading: Transfer photos from Windows to iPhone with or without iTunes >>

For Mac users: Transfer photos from Mac to iPhone >>

If you have large quantities of photos, and prefer to better organize them into albums on iPhone, you can move Android photos albums to iPhone.

Step 1. Prepare all the albums you copied from Android to Computer with above steps.

To better demonstrate the process, we use screenshot from DearMob iPhone Manager as an example. You can read reviews on iPhone photo manager and choose one that suits you.

Method 2. Transfer Photos from Android to iPhone with Google Photos

If you prefer a reliable wireless way to migrate pictures, Google Photos is the answer. As long as you have a good Wi-Fi network connection (or a 5G Android phone), and your photo doesn't exceed following limitations, you are good to go.

Step 1. Install Google Photos on your Android phone, and allows it to backup your photos.

If the auto uploading process doesn't start, you can manually check photos to upload.

Step 2. On your iPhone, open up Google Photos and sign in with the same Google account you use on Android phone.

When Google photos finishes syncing, select all the photos, tap the share icon and select Save to Device.

Syncing photos from Android to iPhone via Google Photos app could be extremely slow if you have tons of photos. You can visit Google photos online to batch download all the photos at once for good.

Method 3. Transfer Photos from Android to iPhone with Drop Box

Depending on which service and platform you use to host your content, you can use Dropbox, OneDrive and the alike to transfer Android photos to iPhone. This methods works similarly with using Google photos, since the workflow are the same:

Same work flow, same flaws: you cannot maintain photo albums on iPhone camera roll in a structure that you carefully curated on Android. If you have tons of photos to organize, refer to Method 1 above.

Can I Use iCloud on Android to Move Photos?

No. There is yet a iCloud app on Android to sync photos, though you can use iCloud email account on Android to transfer your contacts and calendar content.

Can I use Samsung Smart Switch to transfer photos and content from Samsung to iPhone?

No. Samsung Smart Switch only supports the iOS to Android transfer, not the other way around.

Joakim is a tech addict and mobile enthusiast ever since the Symbian era. Now as a technical writer, he loves to test software and devices, and share his discoveries in plain language. Jogging helps him think better and stay energized throughout the day.

> iPhone Manager > How To > Transfer Photos from Android to iPhone