What is 4K UHD Video?

4K resolution is the ultra-high resolution standard of digital television, movies and videos. It is four times the number of pixels of 1080p HD, thus it can render more than four times higher image definition than 1080p resolution. If you use a professional 4K video player to play 4K UHD videos on your 4K devices, you will see more detailed pictures, fresher colors, clearer movements and larger project surface visibility than the HD videos. If the 4K video playing process is DTS/Dolby compatible, it would also bring theater effects even you play 4K UHD videos on computer.

YouTube had enabled 4K video support in the middle of 2010, and other platforms including Netflix, Vimeo, Amazon, etc also follow the trend and provide 4K video resources. Besides, the number of 4K-capable hardware like smart TVs and cameras are also increasing rapidly in recent years. So, to play such 4K UHD videos quite sharper than 1080p HD videos on computer or TV smoothly, the 4K UHD player is the priority you should think of first.

4K contents can be downloaded from online sites, ripped from DVDs or recorded by iPhone, GoPro, cameras and camcorders. So, 4K contents could be 4K movies, 4K video clips, 4K DVDs, 4K 360 VR videos and so on. Now that your urgent need is a 4K UHD video player to play the whole types of 4K videos, movies and DVDs, please go on reading our in-depth guide to get the best free 4K video player and learn how to play 4K UHD videos easily and without quality loss on Mac, Windows 10 and smart TV.

Kindly remind, 4K videos are often encoded with HEVC/H.265 codec, and saved in container format like MP4 and MKV, so the 4K UHD player you select should also be a HEVC/H.265 video player that supports MP4, MKV and more. If you are just searching for a new 4K video player to replace the old one, chances are that the old player ran into a problem and had no ability to handle 4K videos. Luckily, this guide will teach you how to play 4K videos successfully with a 4K UHD video player like 5KPlayer ↓↓↓.

From 4K resolution Wikipedia, we have known that 4K is the new standard and is the most popular resolution for 4K contents and displays as of now or even in the following years. Quite sharper and heavier than 1080p HD videos, 4K videos bring much more exquisite image qualities indeed but also need higher requirements to your 4K video player, computer, TV, etc. It is said that the information of a 4K video can reach up to 50MB/fps, so it is not as easy to play 4K UHD videos as 1080p HD video playback. To play 4K videos with the best effects and assure that the device won't die in the attempt to play such high-res videos, here are some basic requirements.

* A 4K-compatible monitor and HDMI 2.0 cable.
* A 64-bit computer with 64-bit system and 64-bit CPU is better.
* NVIDIA GeForce GTX 970 graphics card on wards.
* Processor i5 (or i3 of the Kaby Lake family) ot higher and at least 8GB of RAM.
* SSD hard disk or a good Internet connection with a bandwidth of at least 25Mbps.
* A 4K media player with HEVC decoder and GPU acceleration support is better.

* A 4K-capable smart TV with 4K display from big companies like LG, Sony and Samsung.
* The HDMI 2.0 cable.
* Fast Internet connection with a bandwidth of at least 25Mbps.

How to Play 4K UHD Videos on Computer? – via Free 4K Video Player

If your Windows or Mac computer is not that old, all you need to do is to choose a qualified 4K video player for Mac or Windows 10 to play 4K UHD videos. Though the concept of 4K has emerged for a quite long time, the demand for this type of video is increasing day by day. There are more and more 4K and UHD videos available online and offline in different forms, so the 4K UHD player should also be powerful enough to handle numbers of 4K videos.

Luckily, the Hardware Accelerated video player 5KPlayer is the most ideal one we found as of now for 4K UHD videos playback.

★ First praised feature of this free 4K video player is that it is in favor of Windows and Mac 64-bit, and thus it makes up for the deficiency of a 64-bit media player on a 64-bit computer. Then, it is able to take advantage of the 64-bit CPU and 64-bit operating system to help maximize the efficiency of the 4K video decoding process as much as possible on the high-end PC. Besides, the 5KPlayer 64-bit version could also handle H.264 8K and HEVC 10bit HDR highly compressed videos much more easily than before.

★ Empowered by Hardware Decoding and Software Decoding tech, 5KPlayer can freely switch from a software player to a GPU-accelerated player to assign the 4K video decoding task to GPU and thus leave more CPU space for other processes. From 720p/1080p/1080i (MKV/MTS/MP4 etc) videos to 4K even 8K files, this free 4K UHD video player can render super smooth playback without glitches. Hardware Acceleration technology is quite useful when you are trying to play 4K UHD/HDR videos on computer no matter it is lower-power or in high configuration. From our experiment about hardware decoding vs. software decoding, turning on hardware acceleration on 5KPlayer helps play 4K videos successfully on lower-end computer and helps save 16% ~ 18% CPU usage on high-end computer obviously.

How to play steps: To play 4K UHD videos on computer with 5KPlayer, just free download this 4K video player on your computer, install and launch it. Then, you can simply drag'n drop your 4K UHD content to it to play or click on the Video icon on the main UI to choose a 4K file to play.

How to Play 4K UHD Videos on Smart TV?

A 4K TV can hold four times pixels compared to that of a 1080p TV, so a 4K-capable TV is the necessity for 4K UHD playback on TV. Because the resolution is much higher, it therefore requires more bandwidth to transmit. So, you should choose the cable HDMI 2.0 and make sure the Internet connection is strong enough to enable smooth 2160p video stream. When the 4K-compatible TV allows for a significant jump in clarity, you need 4K source materials to amplify the 4K effects. YouTube and Netflix would be the great platforms for you to play 4K UHD videos over their services.

What if you want to play 4K videos from computer to smart TV? 5KPlayer is a good way. To experience immersive 4K video, it would be better if the screen is larger. Besides a 4K video player for Mac and Windows 10, 5KPlayer is also a 4K video streaming player that helps stream 4K UHD contents from Mac/Windows to Samsung, Sony or LG smart TV. 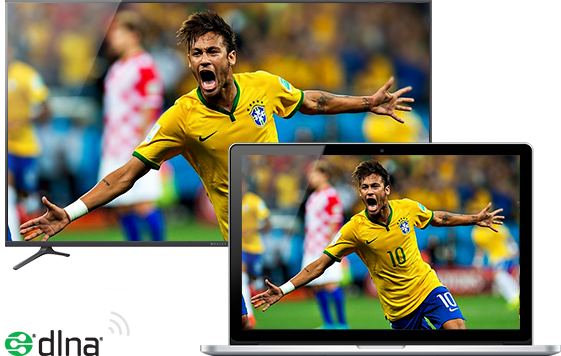 Step 1. Free download 5KPlayer, install and launch it on your Mac or Windows. Then, connect your computer and smart TV to the same network.

Step 2. Click on "DLNA AirPlay" icon on the main UI to access the Settings window. Then, turn on the DLNA service and complete other tasks and close the window.

Step 3. Click on Library on the main UI of 5KPlayer and click DLNA Server to enter the DLNA streaming center, where you could add 4K files/folder for 4K streaming and see kinds of DLNA supported devices that 5KPlayer can stream media to.

Step 4. After adding, simply click on DLNA Share under DLNA Server to access your 4K videos. Then, choose one to play and click on the DLNA icon on the top right corner of 5KPlayer and 5KPlayer will instantly send 4K UHD video from your computer to your smart TV.

Common 4K Video Playback Errors that Can be Solved by 5KPlayer

4K videos bring better media enjoyment indeed, but HEVC/H.265 4K video files truly take a lot of horsepower of your hardware and software to decode on the fly. Before finding a good way to play 4K UHD videos on Mac/Windows computer or smart TV, you more or less have encountered one or more of the following 4K video playback errors.

4K stream problems:
* If the Settings are not set properly in advance, you may encounter choppy playback of 4K video files when connecting PC to 4K TV via HDMI.
* Washed out colors when streaming 4K HDR video files to Xbox One S.
* ......

Assuming that you have such 4K video not playing errors, 4K video player 5KPlayer could give some help to play 4K UHD videos on Mac, Windows 10 and TV easily.

To play 4K UHD videos successfully, even the most powerful computer can't play a 4K video alone without the help of a 4K video player. Ranking No.1 in the 2020 5 best free media player for Windows 10 and Mac that outshines other media players due to great speciality and versatility, 5KPlayer has attracted over 9,000,000 users worldwide. Besides, this outstanding freeware is shipped with download and DLNA features, which you can use to save thousands of 4K UHD contents from the whole Internet and stream them from computer to Samsung/Sony/LG and Apple TV. Keeping updated with the major trend of technology and media world, this omnipotent 4K UHD video player never fails to deliver you excellent 4K UHD videos playback, downloading and streaming.

1. What is 4K? – 4K Wikipedia
4K resolution is a new resolution standard for digital cinema and TV industries. The 4096x2160 pixels (DCI 4K) is the cinema standard, while for televisions, the 4K resolution has been standardized to 3840x2160 pixels (4K UHD). 4K format was named because it has 4000 pixels horizontal resolution approximately, so it is not surprised that many videos can be called 4K like 4096 x 3112, 3656 x 2664, 4096 x 1714 and 3996 x 2160.
4K is popular. It has involved several fields including hardware like TV and camera, software like 4K video player, videos movies, DVDs, displays, monitors and so on. Even the video streaming services like YouTube and Netflix also get in this party.

2. 4K Video Codec and Format
Common 4K video file formats include MP4, MTS/M2TS, AVCHD, MKV, XAVC and MXF. And the codecs to encode 4K videos are variable but the most used ones would be HEVC and H.264.

3. 4K vs. UHD
4K is often considered as the same as UHD. However, there is something different between 4K and UHD. Simply put, 4K is more referring to 4096 x2160 video resolution or how the 4K contents are encoded, while UHD is more likely to mean 3840x2160 display resolution, for example, almost every TV and monitor you see advertised as 4K is actually UHD. Whatever, when referring to 4K UHD videos playback, they are the same thing.

4. About 4K HDR
As the term suggest, 4K HDR is a concept combining 4K and HDR. 4K refers to more pixels to show sharper clarity while HDR benefit picture quality. HDR will provide wide range of colors and enhance the contrast, thus making the pictures closer to what the human eye perceives naturally in the world. Also, HDR can also enhance each of the pixels of 4K so that a 4K HDR video or display will become more eye-pleasing.

5kplayer
How do you think of 5KPlayer, rate now:

Copyright © 2020 DearMob, Inc. All Rights Reserved.
All other products or name brands are trademarks of their respective holders. All logos, trademarks and images relating to other companies that may be contained wherein are applied in the Internet that are not used for commercial use. DearMob's software is not developed by or affiliated with such companies.