Which FLAC player is the best choice to player FLAC music files (Free Lossless Audio Codec) on your computer? Without file format conversion or complicated modification to your present media player, is it possible to FLAC file with high fidelity? Yes and yes because you have come to the right place: Here in this article, you will learn which is the best FLAC player Windows 10/7/8.1 & Mac and how to use this music player to play your FLAC audio files, ALAC, WAV, Monkey's audio, OGG and MP3 music ripped from CD, downloaded from music PT websites or received from a friend, etc.

How to Play FLAC ALAC MP3 Files with FLAC Player?

You need to use 5KPlayer that stands out among all popular free FLAC players to play your FLAC files on Windows 7/10 and Mac smoothly. Give it a spin to experience playing FLAC, ALAC, WAV lossless music files with all basses and pitches on your computer, anyone can handle it effortlessly.

What Is FLAC Format?

FLAC, standing for Free Lossless Audio Codec, is an open source audio coding format for lossless compression of digital audio. Namely, no sound quality is lost in the process of compression so that a common FLAC player can render good sound effect. Besides, any digital audio compressed by FLAC algorithm can typically be reduced to 50 - 60% of its original size, making FLAC audio file lightweight enough to handle with any FLAC music player. FLAC music is also very convenient for CD archiving for preserving any audio collection. If you have a FLAC copy of the audio tracks, you will never worry about the loss or damage of original data as a FLAC file is always ready to help restore all original data. Besides free and lossless, FLAC is also fast in decode speed, Hardware-supported for various digital audio player, streamable for picking up in the middle of stream with minimum delay. Though FLAC can be played by most FLAC players, you'd better choose a versatile FLAC audio player like 5KPlayer compatible with different OS to resist errors as FLAC is supported on most operating systems, including Windows, OS X, Linux, etc.

5KPlayer can handle any FLAC file without converting the format and installing external codec that most players have to like Windows Media Player. With built-in 180 + audio codecs, this FLAC music player can play just any music file including lossless FLAC WAV ALAC APE, lossy AAC MP3 AMR OGG and other audio files without choke. Supporting Dolby AC3 and DTS stereo sourrorund sound playing, 5KPlayer can deliver better-than-CD theater-effect sound to take your lossless FLAC music to a higher level. Lightweight, powerful and workable, playing FLAC with 5KPlayer FLAC player is as easy as ABC.

5KPlayer, topping Softonic Download Chart for several times, is a popular FLAC music player owning a strong fan base. It is available at no cost on Windows 10/8/7/Vista and Mac OS X/macOS to play both lossless FLAC, WAV, ALAC, APE, and lossy AAC, MP3, AMR, OGG, etc. formats in audiophile-quality. Ranking No.1 in the list of best music players, 5KPlayer dethrones other FLAC players with its adaptability to DTS/Dolby surround sound, Hardware Acceleration for fast FLAC music playing, internet music radio connection, movie/DVD music playback, etc. As it is mentioned above, 5KPlayer's multiple audio codecs make it a versatile audio player to handle a variety of audio files. Here, we would like to explore more about this FLAC player.

End? Definitely not. Get this FLAC player and you will receive extra benefits. You can free download music FLAC MP3 AAC etc and videos movies MP4, FLV, AVI, WMV, MKV, etc. from Dailymotion, Facebook, etc. and stream them to HDTV wirelessly at will. Video conversion ability is also built in 5KPlayer.

Aiming at delivering Hi-Res music, VOX FLAC Music Player is a powerful music solution only for Mac that you can use it to play FLAC, MP3, CUE, APE and M4A music files. To help you enjoy lossless streaming and HD audio, this FLAC Music Player for Mac has been equipped with VOX's Audio Engine to fully utilize a Mac's potential, making it possible for you to play Hi-Res Audio (HD Audio) with up to 24bit/192kHz, at 4 times higher than the standard 44kHz sound resolution. Like 5KPlayer, this FLAC player also supports 5.1 multichannel audio playback and Internet radio station connection for more online FLAC music. Better still, you can enjoy your iTunes music on Mac, search/browse and manage your music from Soundcloud, and use VOX FLAC Music Player Mac as a YouTube Music Player to stream any YouTube link on Mac.

This multifunctional FLAC player can play pretty much any media files on your Mac. For as long as you throw a media file at it on Mac, it plays the music in a perfect manner. Meanwhile its also sports excellent utility to stream media files from mac to AirPlay devcies, or from iPhone to Mac. If you'd like to try Elmedia Player for Mac PRO version, you're going to like its online video download functionality which simply helps you download video or music files from online websites.

Winamp is a basic FLAC player for both Windows and Mac, it supports Multi-languages including English, Chinese, Turkish, Romanian, etc. and consists of over 20,000 skins that you cancustomize the appearance of this FLAC media player at your choice!
As a professional music player, Winamp is able to play a wide range of music formats including MP3, WMA on Windows and Mac OS, and because it contains loads of plug-ins available, it can literally play every audio file you throw at it. Plus, because this FLAC music player software is small (only 12.43 MB) and simple, it works pretty quicker than any other FLAC players on almost all computers. The other bonus features including iPod Sync support, iTunes library import, etc. makes it a fully featured music player and is also a really good replacement for iTunes.

VLC is a well-known multi-media format player that supports playing FLAC natively. Normally people would apply it to play different videos files which other video player failed to play, but when it comes to music player, VLC media player is a bit chunky. You can still import FLAC files to this FLAC player and create your own FLAC music playlist, and it will play them without effort. It's not mind-blowing though, just that the music quality is not gonna be 100% original because of its Dynamic Range Compression feature which will automatically make the sounds to adjust the hardware.

Besides, when playing video files with this FLAC player, you should also pay attention to the VLC audio delay problem, make sure you won't get an uncomfortable experience with this FLAC music player on all operating system.

"A few days ago, I downloaded dozens of lossless FLAC music online but all of them can't be played with iTunes on Mac. Some guys suggest me to convert FLAC to MP3 or install FLAC codec to fix this, but I think both of the solutions are very inconvenient. Is there any FLAC player that can play lossless FLAC music files directly?"

In fact, neither Mac iTunes nor Windows Media Player will play FLAC files directly. But 5KPlayer can make it. It is well designed for lossless, gapless playback of FLAC music albums and live recordings on Windows and Mac OS, including Windows 7/8/8.1/10 and macOS Sierra. It is simple, lightweight, powerful and workable without additional FLAC codec or plug-ins. Playing FLAC with 5KPlayer FLAC player is as easy as ABC.

With the true audio connoisseurs, this FLAC music player support the world's premium sound system which allows you to enjoy 5.1 multichannel audio playback for the most sophisticated audio playback experience on both PC and Mac. As a smart music player with DTS support, 5KPlayer not only conveys video and audio with superb quality but also let you personalize your FLAC music playlist and you are free to choose to different playback models, such as single loop, shuffle play, or play the playlist one by one. This FLAC player is free and 100% safe, once you have it, you are done with any music playback problems. Get it free now!

How to Play FLAC File Music with 5KPlayer?

With 5KPlayer, playing FLAC music files is as simple as playing MP3 and common audio files. Read to learn how to play FLAC with this FLAC player.

The file size of 5KPlayer is much smaller than other FLAC players in the market. And it comes with native support for FLAC, thus you don't need to install other items to assist it.

Dragging and dropping FLAC files in the main window is the most convenient way to load FLAC music files for playing. Additionally, you can make use of the "Music" or "Open with" option to open FLAC files with this FLAC player. Once loading successfully, you can enjoy lossless FLAC music immediately.

To convert FLAC to MP3/ACC or ALAC,
Step 1: simply locate the audio file in Library first and click the "Convert" drop-down menu.
Step 2: select the convert to MP3/ACC option.
For more advanced FLAC conversion purposes, you might want to get a professional FLAC audio converter for Mac/PC.

Tips and Notes:
Since MP3 is lossy format, converting MP3 to FLAC won't restore any of the data lost when MP3 is created. Therefore, don't bother that meaningless revert conversion as transcoding from MP3 to FLAC is just a waste of space and time. 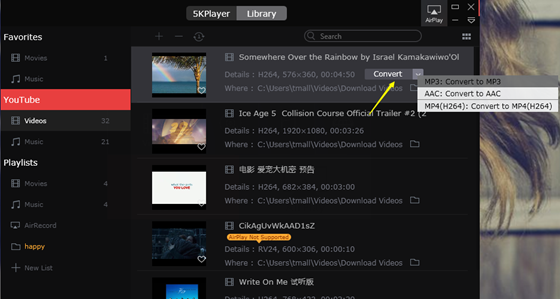 What's the Difference Between FLAC, ALAC and AAC?

Lossless formats: FLAC (Free Lossless Audio Codec) and ALAC (Apple Lossless Audio Codec)
Generally it is about personal preference not the sound quality, since both FLAC and ALAC are basically the same other than the latter is an Apple-specific technology which can be played by iTunes. For hi-fi lovers, it is your devices' compatibility that matters when choosing between the two formats.

Best HD Lossless Audio Music PlayerWhat is lossless music player software and which one should audiophiles choose? Here we introduce you one.