3D VR: 5 Things You Should Know About What is VR 3D

3D VR can't be a better buzzword name 2016 after since VR 3D crowns technical kingdom all in a flash. Before you figure out what is VR, there already are dozens of 3D/VR glasses and headsets like Oculus Rift, Samsung Gear VR, Microsoft HoloLens, Google Cardboard. Follow by 3D VR movies that spring up one after another one. This article is a easy-to-understand know-how to keep you posted about 3D VR movies/glasses in 3 minutes check it out!

To download 3D VR movies, YouTube 360 videos, and 3D movies that drags you into an interactive world of immersion, you'll need the help of 5KPlayer - A free online video downloader and 360 video player that brings some insanely awesome VR 360 experience to your computer superfast!

In order to get a quick picture of 3D VR, the 5 things condenses seas of VR 3D news - Keep your self posted about VR 3D in 3 minutes!.

To Watch 3D VR Movies, What Do I Need?

The 3D VR movie you found on YouTube is split into 2 pictures? Good of you first, the video clip you get is a 3D one in real terms, and the split you see precisely explain what is VR. This is because a pair of 3D VR glasses can work with the split images to create immersive Virtual Reality. So, in order to watch 3D VR movies, you need:

1. A pair of 3D VR glasses (Or 3D VR headset)
A 3D VR equipment turns any blurs, double images, distortions of a virtual video/3D VR games into touchable, interactive experience that we call reality. Without such a gadget, you won't be able to immerse into the full scenario of a horror movie or gunplay, or interact with any object that conjures out of VR 3D.

Note: A VR video player would be a must to play 3D VR movies on computer, you may refer to this review of best VR video players to choose one.
Alternatively, if you want to watch VR videos on iPhone, you may download a VR APP such as: Discovery VR for iOS, or visit this full tutorial on how to watch iOS VR video iPhone.

If you use a Samsung or Android phone to watch 3D VR movies, Smash Hit for Samsung Gear VR, Cardboard for Android Phone would be good to go.

How Does It Work When You Strap 3D VR Glasses to Bonce?

To put it short, a 3D VR movie captures all possibilities for your eyes, and your 3D VR glasses filters what you "see" by tracking the movements of eyeballs and head. So what are the best VR and AR headsets?

But that's a general definition of 3D VR glasses covering a full catalogue of lineups: Headsets like Oculus Rift works in conjunction with your PC once plugged in to its DVI or USB, the popular Google Cardboard relies on your iPhone/Android and Samsung Gear VR can work deftly only when you have a Samsung smart phone.

But one thing these VR 3D equipments share is the full-fledged sensors to offer head-tracking functionality, and a highly flexible refresh rate to cut lags.

So we have the next problem: Why Do We Call It 3D VR, Does It Have Anything To Do With 3D Movies?

In traditional 3D movies, 2 cameras capture images for your left/right eye respectively. When you put on a pair of red/cyan glasses, each eye sees the image prepared for it, thus creating a stereo, 3D video experience. But unlike 3D VR, you only get this feeling if you stare at the flat screen. OKay, words may not be straight-forward enough and you can download 3D movies to give it a go.

However, when watching 3D VR movies, or playing 3D VR games, alongside the above-mentioned "immersive" and "interactive" experience as of left-to-right, you can raise eyes into the sky (or down to the ground) to find solid objects - the tagline difference between 3D VR and traditional 3D movies - when you look up above a 3D movie screen only to find the curtain or cinema wall.

This is easier to answer compared to the 3D vs 3D VR part.

A plain 360 video is shot with a 360 camera, currently video of this kind are available on YouTube 360 channel. It show what's around "you" from a certain point when you watch it with naked eye.

Yet if it's a 360 VR video, same splited screen with naked eye. But the time you put on a compatible VR headset, the insanely overwhelming 360 VR experience wraps you up as if in a movie-like new world.

If you want a fresh bite of the awesome 3D VR experience on Mac or PC, chances are that you already have previous knowledge about 3D. Soon after it tops the chart of 3D video players , 5KPlayer is marching towards support for 3D VR and 360° video playback.
A technically-mature VR video player is equally important to which VR headset you choose, especially in terms of its input Bit rate so as to guarantee 0 latency. As a 4K video player which works with Ultra HD hassle-free, there's just every reason to entrust a 3D VR video to 5KPlayer irrespective of format in near future.
You may also take a look at this Netflix 3D movie list for steric enjoyment first!

Step 2: . Get 3D VR movies from websites, find and copy its URL. 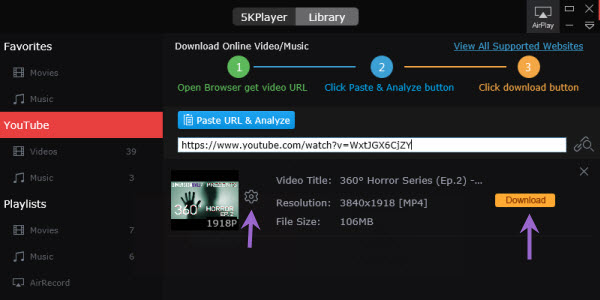 The best free 3D VR movie player renders all-round improvements to play 3D VR movies. In relating to the digital front, it works with H.264, H.265 and other latest video codecs without hassle. Get 5KPlayer for your mind to be blown up the next minute!

Top 4 Free 360° Video Players Windows 10/Mac DownloadHere is a list of top 4 360° video player for Windows 10/Mac out the market that you can use to play 360 degree videos to have the immersive experience on PC and Mac.