When the first 360° video was launched on YouTube, the blowout explosion of 360 panoramic videos is on the way as expected. With Facebook and Vimeo stepping into this field, you now have lots of 360° video resources to enjoy. So, is your 360° video player ready to handle such a many 360 videos? Or is it powerful enough to render smooth 360 video playback when you drag and move the spherical panorama videos in 4K 1080p or 720p up and down, or side by side continually? If you don't own one, you can choose one here.

Good news! 5KPlayer has added 360° video playback feature to its big version v5.7. Now, you can use this highly-praised 4K 360 media player to play 360 degree spherical videos from all directions on Windows and Mac computer. By clicking and dragging the mouse, you can view your 360 videos from top to bottom, or side by side at will. 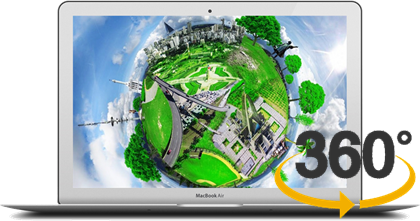 From Wikipedia: 360-degree videos are videos shot with an omnidirectional camera or a collection of cameras in every direction at the same time. After stitching with certain tool, the separate footage will be merged into one spherical video piece and then the 360° video is created. If the stitching process is not perfect, some 360 videos will look bad during playback, so your 360 degree video player shouldn't be to blame under such circumstance.

Besides, 360-degree videos are totally different from VR videos. 360° videos are often displayed on computer and mobile with a 360 video player, while VR videos require you to wear the VR headset to experience the immersive world. Put simply, 360 videos are much easier to access and appreciated as long as your 360 media player is qualified.

5KPlayer, VLC media player, GOM Player, and KMPlayer are the four free 360 video players out the market we choose for you. To help you make the final decision, we have downloaded some 360° videos from mainstream video sites including YouTube, Facebook and Vimeo to have a test. Please go on reading, and find which one is more powerful.

Main features: Play 360 degree videos from all directions in 2D 3D, 180° playback from top to bottom, 180° playback side by side, force-enable the 360 feature to any videos.
OS: Windows 10/8/7/Vista, macOS Catalina and before

5KPlayer now is under active development to become a professional 360 degree video player to help you enjoy the 360 panoramic videos on computer. You are allowed to click and drag the 360 video with your mouse to view every direction and every detail. As always, 5KPlayer supports for 4K video playback, which means the high-res 4K 360 videos are also a piece of cake to this 360 media player. If needed, you can use 5KPlayer to download 360° videos from Facebook, Vimeo, Dailymotion and more to collect the panoramic videos as many as possible.

Sample 1 - https://vimeo.com/215984568: I have tested all of the Vimeo videos with different resolutions in this 360 video list, and it turns out that 5KPlayer is fully compatible with these 360 degree videos. Even the one in 4K performs smoothly when 5KPlayer's hardware acceleration mode is on.
Sample 2 - https://www.facebook.com/mancity/videos/1220743841408863/?t=23: 5KPlayer plays this Facebook 360° video successfully, and all video details are clear.
Sample 3 - https://www.youtube.com/watch?v=pCve1w1GFOs: 5KPlayer plays it in normal mode. 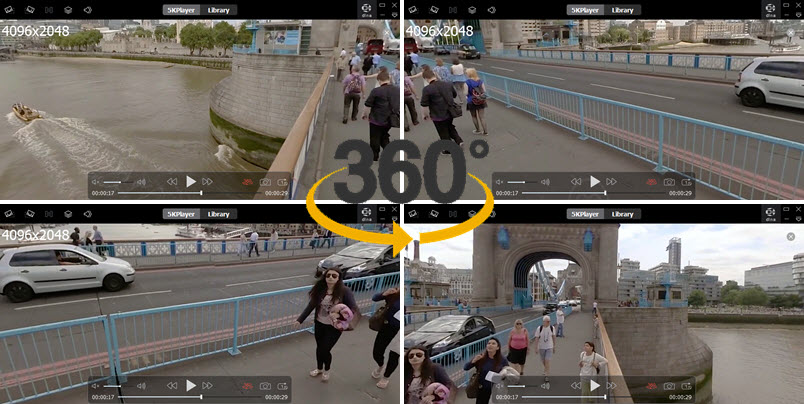 GOM player had added the 360° VR playback feature in 2016, and it seems even better now. The most shinning part of this 360 degree video player is that it allows for local 360 videos playback and at the same time supports online search for YouTube 360 videos. Whatever 360 videos, you are able to watch from up, down, left, right, and 360 degree around by just using the mouse or keyboard. If GOM developer can remove GOM player adware or reduce the number of advertisements, it would be better.

VLC media player is very popular and surely you are familiar with it. However, despite its support for multiple platforms, it is not really capable of playing 360 degree videos as a 360 media player. Most of the 360 videos are not playing with VLC in 360 effects but in a normal mode, and as a result, you can't move your mouse to access all directions.

KMPlayer also has a strong fan base, but it could not be called as a professional 360 video player for its poor performance. From the test, KMPlayer handles low-res 360° videos smoothly without any error, but when the video resolution climbs high say 2K or 4K, KMPlayer gets stuttered and even display no images.

* PotPlayer is claimed to be a powerful 360 media player, but I haven't listed it here as I didn't find where to activate 360° mode on. My PotPlayer is in version 1.7.17508, and I think it is the latest version. If possible, you can download it to have a try.

* I have also downloaded 360 degree videos from Dailymotion in different resolutions, say 4K, 2K, 1080p, 720p, etc, and 5KPlayer eats them all without problems. So, look forward to the coming of 5KPlayer 360 feature.

Best 3D Video Player Freeware for Windows and Mac ReviewRead this review about 3D video players to find the best free 3D video player for you to display 3D movies on Mac and PC along different specs, functions, versatilities, etc.