There are various ways to play media files directly on TV, including simple set-top boxes, compact streaming sticks, powerful game consoles, etc. Among them, TV media player would be the best suggestion to make your TV smarter to enjoy various beautiful songs and movie blockbusters together with your families. From our careful selection, here are some TV media player examples that you can try.

With inborn superiority called AirPlay, 5KPlayer is a new-style media player for TV helping you stream and play media files on TV from Mac and Windows PC without any cable. Also compatible with Pandora, Netflix, HBO Go, etc streaming, this TV media player will contact you with vast number of videos movies online with spectacular pictures and crystal clear sounds. 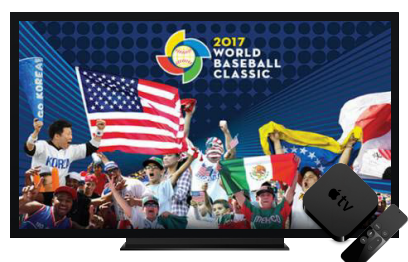 What Is TV Media Player?

TV media player is traditionally or well known as home entertainment consumer electronics device or set-top box like Apple TV, which allows people to play various videos music on TV with a cable from computer, via USB or through online apps like Netflix. Compact streaming stick like Chromecast, streaming DVD player like Sony Blu-ray disc player and game console like PlayStation 4 can also be called TV media player for their perfect connection to TV. Today's TV media player also comes as media streaming software designed to be much more user-friendly and economical that even sometimes you can wirelessly play media files on TV without a dime. To help you make a wise choice, here we gather top 3 TV media players containing media streaming device and TV media player software with their prime specifications for you to choose.

5KPlayer can cut out a niche for itself in the TV media player world for its free price tag, wireless streaming and multi-media supports. As a wireless streaming media player, 5KPlayer could be the most convenient way to play video music on TV. No matter you want to play 4K UHD HD 1080p MKV MP4 AVI etc movies or self-made DVDs, listen to highly-quality digital music on computer or stream them to HDTV, this TV media player would not disappoint you. Besides powerfully controling your locally-stored video music, 5KPlayer also acts as a streaming video downloader for you to download various online streaming videos on Mac or Windows PC and then stream them to Apple TV wirelessly. We recommend 5KPlayer for you as it also supports Pandora, HBO and Netflix streaming that common TV media players can't. Also compatible with iOS AirPlay, 5KPlayer can connect iPhone/iPad/iPod to Mac or PC without a cable to set computer as the screen display to show videos movies.

- Ultra HD video playback: Up to 8K, this TV media player has a strong support for Ultra HD videos including 4K and HD 1080p 1080i 720p, let alone MP4 MKV MOV FLV WMV etc files. Aiming at offering theater-effect audiovisual experience, 5KPlayer is also compatible with DTS/Dolby format to render multisurround sound along with spectacular pictures when you play meida on TV.
- Streaming video downloader: Besides user-generated videos, this TV media player features streaming video download ability providing the feasibility to get various online video music sources on computer. If you are alone at home, you can have various movie blockbusters and HD music to accompany you.
- Wireless streaming to TV: Claimed as media player for TV, it navigates your entertainment choices through your fingers or mouse. Put it simply, you can click 5KPlayer AirPlay button to connect your computer and TV to play media files, or swip the screen of your iPhone/iPad/iPod to send video music to Mac/PC wirelessly.

Plex Media Server is marked as a great TV media player for the limitless online video movie resources for you and your families, and it can directly play the online sources or local files on any devices including Apple TV, Android TV, Amazon Fire TV, iOS devices, Windows Phone, Roku, Chromecast, etc. With this TV media player, you can cut the cord and enjoy various movies, TV shows, music, and photo collection on TV at your fingertips. Like 5KPlayer, it also supports smooth 4K streaming using the H.264 (AVC) codec. However, Plex Media Server on Windows 7 requires Service Pack 1 to make the setup successful, and you have to pay at least $4.99 for advanced features.

- Multi-media playback: Supporting almost all file types, including Hi-Fi music and 4K video, this TV media player allows you to forget converting the media file for smooth playback. with its built-in connection to online resources, you can get contents from various sources, like TED Talks, NPR, Spike, Comedy Central, Soundcloud, etc, to play on TV directly or save them to watch later.
- Multi-platform supports: Besides playing media files on TV, this TV media player also works with iOS devices, Android devices, Chromecast, etc that you can enjoy video movies anywhere naytime.

Though it looks like Roku, Apple TV and many other digital media players, WD TV Media Player has something different from them. Instead of focusing on streaming services like Netflix and Amazon Video, this TV media player pride itself on being able to deliver various media types in your media colloection – video, audio or photo – to your TV and home audio system. The HDMI port lets you connect to the highest quality HDTV to play 1080p HD videos movies. When the device starts up, there are audio services like Pandora, SiriusXM, Spotify, and video service like Hulu Plus, YouTube, Vudu, etc for you to access online contents. However, you can't find Netflix, Amazon Instant Video, HBO Go and some others. Never mind that, WD TV Media Player is still satisfying for the Miracast wireless connectivity to allow you to mirror your screen from devices running Android or Windows 8.1.

- Full HD playback: Up to 1080p, WD TV Media Player plays media files on TV including MKV, MP4, XviD, AVI, WMV, MOV, MP3 and more. You can also view your photo collections and create custom slide shows with a variety of transitions and background music.
- Limitless collections: Access two USB drives, WD TV media player lets you connect two USB storage devices and access them simultaneously, meaning that there is no limit to the size of your media collection and you can play content from most popular USB drives, and digital cameras, camcorders, etc as many as possible.
- Free media conversion: WD TV Media Player includes a free media converter that can convert photo, video, and music files into formats optimized for use on the WD TV HD Media Player.

How to Play Media Files on TV with TV Media Player Wirelessly?

Step 1. Without registration, free download TV media player 5KPlayer, install and launch it on your Mac or PC. Please make sure that your computer and Apple TV are in the same WiFi network.

Step 2. Click AirPlay icon on the main UI of 5KPlayer and choose the Apple TV or other AirPlay-enabled devices. AirPlay tab on your Mac/PC will turn red once the AirPlay is enabled.
* Find the audio music you saved in your local folder, then drag'n drop the file directly to this fast music player to open.
* Right click the music file you want to play and choose Open with 5KPlayer.

Step 3. Add your media file like MP4, M4V, MOV video and MP3, AAC music to the program, and it will automatically play media files on TV from computer. 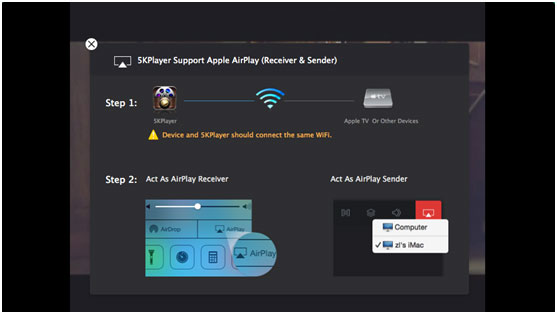 Notice: Like most other TV media players, 5KPlayer can also access you to various online videos movies that you can download videos from Dailymotion, Vevo, and other 300+ sites, and watch them on HDTV. And it also features a built-in video converter that can convert video to the formats MP4, M4V, MOV, MP3, AAC that AirPlay supports.