Commonly, DLNA technology is used from Android to smart TV to enjoy on-the-go videos on big screen. But, with a DLNA certified player Windows/Mac, you are allowed to DLNA media from Android/iPhone to computer and DLNA streaming video music from PC/Mac to smart TV.

From DearMob, 5KPlayer now is a qualified DLNA player to help vast number of DLNA devices talk to each other. For example, Android/iPhone can DLNA streaming videos music to PC/Mac, what is shown on computer can be displayed on a smart TV through 5KPlayer, and mobile handset or TV can remote control the computer and share its media library. 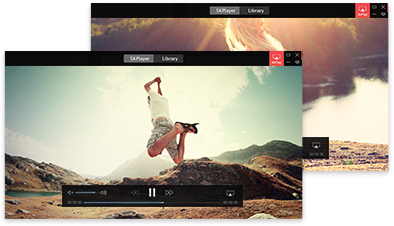 Wiki: What Is DLNA?

Like AirPlay, DLNA (Digital Living Network Alliance) is developed to connect multimedia devices and promote digital media sharing, but DLNA is much more popular than Apple AirPlay as there are about four billion devices is DLNA-compliant: computer, smart TV, game console and speaker, to name a few. That is to say, you will have countless resources to enjoy if you can successfully make these devices communicate with each other. And DLNA player software or DLNA app is the key that opens the door of DLNA technology and helps DLNA streaming videos music among DLNA-compatible devices.

Integrated with DLNA media receiver, DLNA streaming sender and DLNA media server, 5KPlayer as of now is the best free DLNA-enabled player Windows 10/8/7 and DLNA player Mac to help you enjoy the benefit of DLNA technology, that are DLNA streaming videos music on iPhone/Android to PC/Mac, playing PC media on big screen smart TV and make phone or TV a controller to access the rich media library on computer. Especially, 5KPlayer is also a online video music downloader that can download a variety of songs movies from Dailymotion, Vevo, etc to provide you numerous resources to DLNA stream from PC to smart TV without paying extra money.

Needless to say, VLC is a versatile and user-friendly media player offering powerful decoding ability for smooth HD 4K media playback especially version 3.0 with the improved hardware acceleration mode. But, how about the competence as a DLNA player? Once you complete setting Universal Plug'n'Play, VLC will discover and list all the folders and sub-folders from your UPnP and DLNA servers, right-click on the file and choose Play to play videos music on computer from mobile phones and other devices supporting DLNA. Though it is not sure that you can use VLC DLNA player Windows to DLNA media to smart TV, possibility is that you can install VLC app on Apple TV to access the media library in DLNA servers including computer.

With built-in UPnP A/V features, Kodi being the free DLNA certified player can receive UPnP and DLNA content pushed to Kodi, being the DLNA media controller to browse media from DLNA servers and control DLNA devices, and also being a DLNA media sender to share media with other UPnP/DLNA devices. If you'd like to enjoy Kodi's UPnP server abilities, namely, accessing Kodi media library, you'd better install Kodi on both sides as the media files are only locally accessible on the Host Kodi device. But, official Kodi Windows doesn't offer any media resource natively, you have to make use of third-party media downloader like 5KPlayer to download video music to full the media library for sharing.

How to DLNA Streaming Videos Music Among Devices via 5KPlayer?

5KPlayer provides with three types of DLNA streaming to enable media sharing among devices, just follow this step-by-step guide to grasp how to DLNA media files. But, make sure that you have free downloaded, install and launch this DLNA-enabled player on your computer.

Step 1. Connect your Android or iPhone handset and computer with 5KPlayer installed to same WiFi network.

Step 2. Download a video or music player app on your mobile device that is DLNA compatible if you don't have one.

Step 3. Play your media on your mobile device with the app, and you will see the DLNA option within the app for you to choose which DLNA client to stream to.

Step 4. Just choose 5KPlayer, and this DLNA player will play the media from phone on computer instantly. 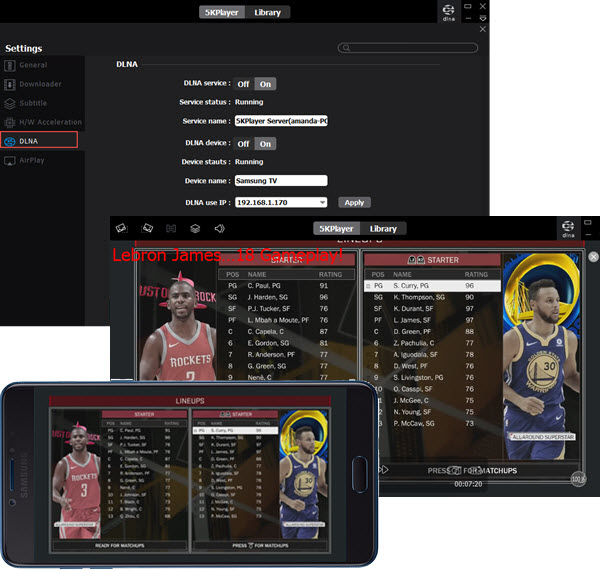 Step 1. Connect your computer and smart TV into the same WiFi network.
Step 2. Click the Library on UI of 5KPlayer to access DLNA streaming hub and search for your TV to connect.
Step 3. Play a video or music via 5KPlayer and then this DLNA player will send what is being played on computer to big screen TV.

When all the devices are under the same WiFi network, you are also able to access 5KPlayer media library from mobile phone or TV using the remote-control gadget. 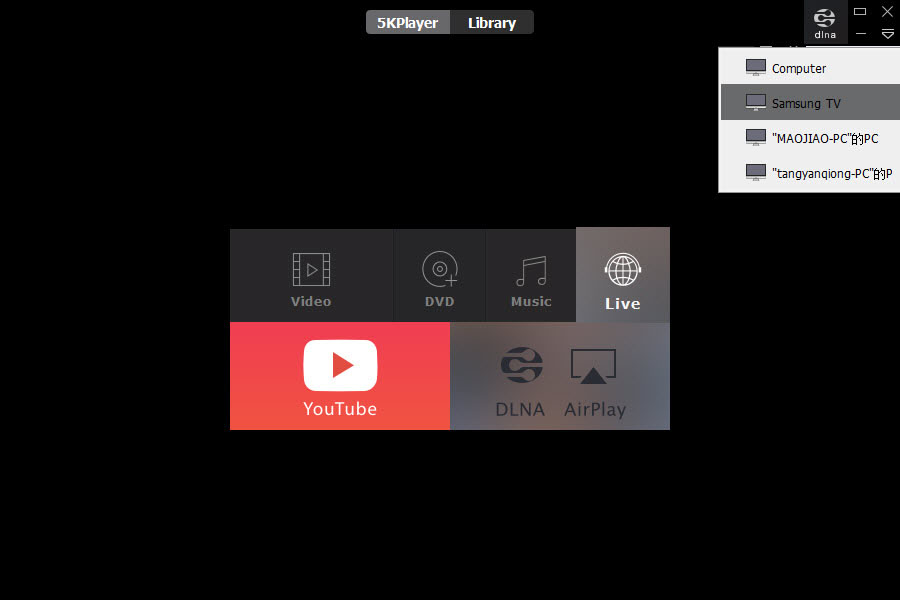 Top 5 DLNA Streaming Apps for iPhoneBest DLNA app for iPhone powers your iOS iPhone to be DLNA-supported to stream media to vast number of devices wirelessly.

How to DLNA Streaming iPhone to PC/TV?DLNA iPhone to TV or connect iPhone to PC using the best free iPhone DLNA server to stream videos music for multi-screen media sharing.

Copyright © 2023 Digiarty Software, Inc. All Rights Reserved.
5KPlayer & DearMob are brands of Digiarty Software, Inc. All other products or name brands are trademarks of their respective holders. All logos, trademarks and images relating to other companies that may be contained wherein are applied in the Internet that are not used for commercial use. Digiarty's software is not developed by or affiliated with such companies.