How to Play 4K Video/Movie on Mac and PC?

▶ Launch the 4K video player on your computer.
▶ Download 4K videos offline if you don't have any.
▶ Right click the target 4K file and navigate to play with your best 4K player.

Or you can just simply drag & drop 4K video to the interface of the 4K video player we list below.

As a media player which plays 4K and 8K videos, 5KPlayer has got a really good reputation among both Windows and Mac users and it is still emerging. With solid 4K UHD playback ability, this free 4K video player is open to play all 4K movies as well as 4K videos songs free download and play. And the major role of this best 4K player is to play 4K, 8K videos and other UHD videos for free. Besides playing 4K videos, 5KPlayer can also download 4K 5K 8K videos and support cross screen 4K video enjoyment, aka, stream 4K content from Mac/PC to Apple TV. For the sake of 4K video content, you own it to yourself this decent 4K player.

* Straightforward user interface makes your 4K video playback easier.
* Subtitle adding and soundtrack switching both available.
* Support 4K video rotate to adjust the playback window according to the 4K display and your preference. 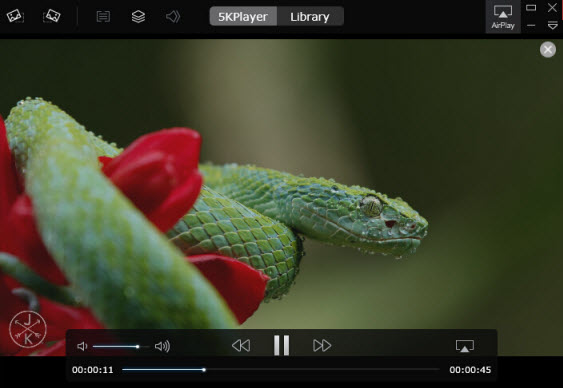 DivX Player is also one of the best 4K video players for Windows and Mac. This 4K video player includes all important DivX codec pack and comes with every 4K film you can watch in DivX, MKV, and HEVC. This is a player you want to download for 4K movies, TV shows playback. But DivX Player only supports to play videos up to res at 4096 X 2160, unlike 5KPlayer can play 8K as well.

This is not a free 4K video player software, but the ultimate 4K exprience makes PowerDVD worth its price. PowerDVD 15 renders movies better than anything else available, and does so without even loading shades, tweaking contrast and saturation, and so on. When it comes to 4K video playback, this 4K video player only takes litter CPU utilization with any reasonably modern processor is quite low. CyberLink PowerDVD Ultra 15 comes at a cost of around $60 but only with the PowerDVD Coupon code.

VLC is widely known for its coss-platform supports as well as the wide range of video formats supports. This open sourced media player is one of the most popular 4K video player that recognized by many users. Even though VLC has problems of playing HEVC 4K videos, with its powerful distortion and field-of-view-correction functions this powerful 4K video player lets you enjoy 4K ultra HD media to the greatest extent. However, VLC should fix the audio delay problem soon, cuz it's really a major problem to stop users downloading this free 4K video player.

Media Player Classic is another 4K video player available for Windows system and actually plays 8K videos better than VLC. This 4K player is very easy to manipulate when playing 4K files. Just start up the application by double-clicking the desktop shortcut, and then play the 4K UHD video you want to watch per the on-screen instructions, or simply drag and drop a 4K UHD video directly onto the playback screen, then you can sit back and enjoy 4K videos even on a smaller computer screen. However, the constant pop up ads annoys the user exprience, hope it can get any improvemant from that.

After acknowledging the pros and cons of the top 5 free 4K video players software, it seems so easy to play 4K video content on your computer right? And if you want to play 4K video on TV, or download 4K videos from 300+ online video sites, you can just simply go for 5KPlayer!

6K HEVC/H.265 Video Player for 6K XDR Mac ProHere is the best free 6K video player that is perfectly compatible with Apple 6K XDR display and Mac Pro to play high-res videos. Also, you can use it to play 6K HEVC videos from 6K cameras or camcorders.