You need 5KPlayer, a free tool to share iPad screen with PC/Mac. Install 5KPlayer on Mac/Windows (Windows 10 compatible). It's an ideal choice for iPhone and iPad screen sharing, also you can record iPadOS iPad/iPad Pro screen without external help.

To set up stable iPad screen sharing, there are plenty of APPs to choose from. Unlike some bare-bone mirroring APPs that were squashed by iOS 9, 5KPlayer employs AirPlay technology, making itself a free and flexible solution for cross-screen display. You can:

Know AirPlay already? Jump to how to use free iPad screen sharing guide >>

Stream a video: from iPad iPhone to Mac/PC
Present a video from iPad/iPad Pro or iPhone XS/XS Max/XR/X/8/7/7 Plus to computer.
Toggle switch AirPlay mirroring "off" on iPad to cast a video windows to computer screen.

A screen recorder: for iPad Air 3/Mini 4/Pro
5KPlayer is an ideal choice to record screen of iPad (iPhone) during iPad screen sharing.
Unlike most screen sharing APPs, which can't record iPad screen unless associated with a recorder like CamStudio.

3 Reasons You Should Choose 5KPlayer for iPadOS iPad Screen Sharing

1. This built-in screenshare technology of 5KPlayer roots from Apple AirPlay, hence it walks you through screen mirroring iPhone (6s/6s Plus and before), AirPlay PC to Apple TV, it also tallies with gear when you stream films from mac to Apple TV.

2. However, screen sharing iPad won't work on Windows/Mac unless you install an AirPlay receiver like 5KPlayer. which turns your computer into an wireless audio receiver that recognizes iPad, iPad Pro and iPhone. Also you may take a look at a review of popular screen sharing APPs: 5KPlayer VS X-Mirage VS AirServer before you decide.

3. Not only for iPad, 5KPlayer is the best desktop sharing solution to TV.
An Apple buff like you may already had a taste of the benefits through AirPlay, which is designed to stream videos in MP4, MOV, M4V and music in MP3, AAC from iOS devices like iPad to Apple TV. If not yet, you may take a closer look at what is AirPlay and how to use.

Want to screen share iPad with PC/Mac that's plugged in to projectors? Or simply mirror iPad screen in order to zoom in videos? This section covers 3 parts:
1. iPad screen sharing : photos, documents, web pages
2. How to record iPhone/iPad: Record during screenshare
3. Stream a video from iPad: Share iPad videos to PC/Mac
Once installed on Mac/Windows, you can 1:1 share iPhone screen to the computer display.

Full screen share iPad replicates everything on your iPad screen to computer irrespective of format. This mode is extremely useful if you need to replicate photos, documents, webpages on iPad to computer and operate, i.e. for presentation or a group meeting. iPad screen sharing is available even when you plugs PC to a projector.

Step 1: Download and install 5KPlayer for Windows (Windows 10) or Mac.

Step 2: Connect iPad and PC to the same Wi-Fi (3G/4G not supported now)

Step 3: Call up control center
Swiping up from the bottom of iPad screen, hit AirPlay before a list of AirPlay destination is shown, choose your computer.

2. How to Record (iPadOS) iPad Screen During Screen Sharing?

3. How Screen Share iPad Videos Only? (Stream Videos to PC/Mac)

To share one video on iPad with PC/Mac, you may turn off the "Mirroring" option. Then from any corner in the room, you can present movies on iPad to a bigger screen.

Step 1: Download and install 5KPlayer for Windows (Windows 10 compatible) or for Mac.

Step 2: Connect iPad and PC/Mac to the same Wi-Fi or Ethernet.

Step 2: Choose the movie to play on iPad, then free iPad screen sharing will begin automatically. 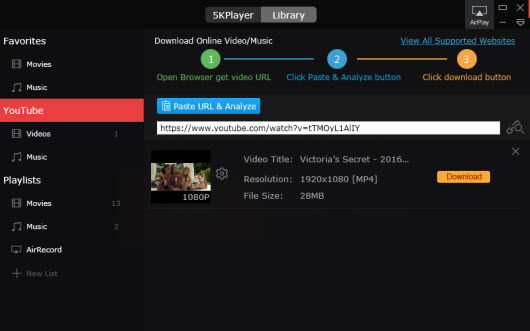 How to Record iPad Screen Sharing and Save?

The mirroring-based screen recording, making it possible to capture your iPad Pro/Mini/Air movements and voices as well, is by far the first free overture provided.

Step 1: When mirroing is enabled, click the red icon on Mac/PC to begin screen recording iPad.

Step 2: You can later access recorded screen videos in the "AirRecord" tab.

Detailed above are the major features of 5KPlayer screen sharing functions. Based on the built-in AirPlay, this free widget supplies an integrated solution to screen share iPad, iPad Pro, iPhone (XS/XS Max/XR/X/8/7/7 Plus etc) with PC/Mac and AirPlay mirroring iPadOS iPads.

If you'd like to use this tool in conjunction with group meetings APPs like join.me, goto meeting, no extra setting is required. Either connect your iPad with computer before or after you start an online meeting session, then you're good to present the screen to a remote audience.

How to Screen Mirroring iPhone 7/7 Plus?

Copyright © 2020 DearMob, Inc. All Rights Reserved.
Any third party product names and trademarks used in this website are property of their respective owners. All the related logos and images, including but not limited to Apple's AirPlay®, Apple TV®, iPhone®, iPod®, iPad®, iTunes® and Mac® are registered trademarks of their own. DearMob, Inc. is not owned by or affiliated with Apple Inc. and any of those companies.