As a professional media player for Microsoft Windows OS of all versions with unique style, 5KPlayer is designed and customized specifically for Windows 10 OS with FUHD (8K) res supported to play video music, radios and DVDs worldwide. Do not buy it? Just free download and have a try!

I hate to say this, but the best Microsoft media player for Windows 10 can never come from Microsoft Company! For that, let's take e a review of attempts Microsoft has made these years:
1. Microsoft Web Browser – Internet Explorer, dead at IE 11;
2. Microsoft Windows Media Center, discontinued in Windows 10 due to infinitesimal customer use (see more features/info of Win10);
3. Microsoft Windows Phone, still eking out a living yet not far from dying;
4. Microsoft search engine Bing, sucks and never outmatching Google;
5. Microsoft Tablets like Windows Surface, unable to rival Apple iPad at all.
It seems that Microsoft can only find its way out of these failures/back burners to gain profit by concentrating all its strength back to the original motive of creating – Windows OS and optimization. Then, drawn from the above facts and –think about best Microsoft media player for Windows 10 –the conclusion would be clear that we can never ask Microsoft for that.

From the self-amputation and decline in market share of Microsoft, it can be obtained that Microsoft is good at Win OS development, but as for the best Microsoft media player Windows 10, it will never be Widows Microsoft Media Player, and neither will it be provided by Microsoft!

1. Super HD Playback Support: the new Windows10 will support 8K resolution and OS support for MKV codec, but the 8K video never plays well enough without a HD media player for optimization! Windows Microsoft media player do not support 8K res at least for now, while 5KPlayer does. This free alternative to Windows media player for Win10 ushers in 8K res supporting and serving as the best 8K player on Windows 10 to let every pixel dancing on the screen.

2. Streaming: By Comparing AirPlay/mirroring and Microsoft media player Play TO stream, it's not hard to find that AirPlay/mirroring outweighs significantly: Xbox streaming to Windows 10 in terms of video and music is impossible without 5KPlayer at all.
Microsoft claims that they've got many devices for the Play TO stream used by Microsoft media player, but the use of Windows phone, tablets and digital media servers/players has dropped, which in return contributes to an even sharper decline in the need for Play To stream. AirPlay, on the other hand, an open streaming protocol, is widely applied to tons of devices, software and applications. The free replacement of Windows media player for Windows 10 –5KPlayer in this regard employs AirPlay to realize multiplatform 8K/4K streaming for you easily as ever.

3. Sources: Microsoft Windows Media Center is demised, meaning that Microsoft has cut the source provision for Windows users, esp. recorded live TV shows! Thus, the original integration of media source and playback function is segregated, with only Windows Microsoft media player for playback function remained, whereby we'll have to find media sources in person! This leads to the fact that in only two scenarios can Windows Microsoft Media Player become useful – play local files and DVDs. However, Windows media player does not support online video download to your local disc. Its utility is narrowed down to playing DVDs and videos recorded by you.
The free media player for Microsoft Windows 10 gathers all the internet media sources right behind its UI. With one or two clicks, you can free download 8K videos and all the other videos to your PC and stream them in any formats – AVI, MKV, MTS, etc!

4. DVD playback: 5KPlayer is also adept at playing DVDs on Windows 10 and encrypted DVDs rented from Redbox. By a simple download of this Windows Media Player alternative, you can make up all the defects of Windows 10 for entertainment.

For those who are not willing to upgrade to Windows 10 this month or later, 5KPlayer can also serve as a great or Windows Microsoft Media Player replacement for your Windows VISTA/7/8/8.1.

Step 1: Download and run this media player for Microsoft Windows 10;

Step 4: Copy and paste the link into the box and tap to analyze.
*When a videostrip shows up with a download button, you can click download to save the files you want. 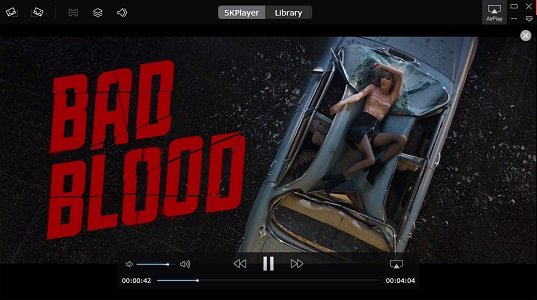 Free VP9 Player for VP9/VP8 Video Playback on Mac/Windows OSHere we introduce you 2 professional VP9 players that can decode VP9 codec as well as VP8 and play back these videos smoothly without glitches.