360° VR video is abosolutely an irresistable trend now and in the future for its great appliance to various fields. For example, Victoria's Secret 2016 Show Backstage was displayed in VR 360°; VR games are replacing Pokemon Go in game industry and YouTube had created a brand new 360° Video channel to gather 360 degree sport, fashion, music, etc videos. From 360° videos, you can get more touching and vivid experience beyond 3D. So, here we list top 7 360 degree video players Windows 10/Mac to play 360 degree videos and satisfy your curiosities of the 360° VR technology.

5KPlayer adds support for 360° videos playback in its version 6.0, so as to help you play 360 degree videos from online sites like YouTube, Dailymotion and Vimeo, and from 360° cameras like GoPro Max, Samsung Gear and Insta360. By clicking and dragging your mouse, you can view the 360 panoramic videos side by side, or from top to bottom. BTW, 5KPlayer also allows you to download unlimited 360 degree videos from online sites to local storage, iPhone, iPad, Android, etc. 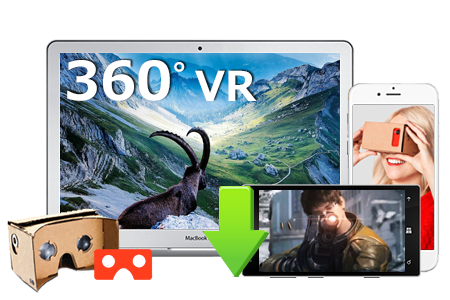 360° videos, shot with an omnidirectional camera or a collection of cameras, are video recordings where a view in every direction is recorded at the same time. During the playback with a specific player called 360° VR video player, you can control the viewing direction of a downloaded VR video like a panorama to have the real VR (Virtual Reality) experience.

5KPlayer is a trend follower that won't drop 360° video playback, so it adds the 360 video support in its latest version. No matter your 360 degree videos are from 360° video sites like YouTube, Vimeo and Facebook, or from 360° cameras like GoPro Max, Samsung Gear and Insta360, this 360 degree video player handles them well. You can just click and drag your mouse to view every detail of a 360 video even up to 4K from all angles.
Download resource: https://www.5kplayer.com/

Key Features:
* Play 360 degree videos from all directions in 2D 3D, 180° playback from top to bottom, 180° playback side by side, force-enable the 360 feature to any videos.
* Support for 360° video download from 360 video sites including YouTube, Facebook and Vimeo.

With the help of Giroptic, VLC now has released its official version of VLC 360 becoming one of the best 360 degree video player apps to play 360° videos and images out of the box. Along with that, VLC-VR is also vailable for Android, iOS and Xbox One and will support VR headsets like Vive, Daydream, Oculus or OSVR.
Download resource: https://www.videolan.org/vlc/releases/3.0.0.html

Solutions to VLC 360 not Working Problem >>

Key Features:
* Is able to watch from up, down, left and right, 360 degree around, by just using the keyboard or mouse.
* Supports preview with side views from front, back, left and right as well as screen transition.
* Provides search and play functions for 360 videos.

GoPro VR Player (formerly Kolor Eyes Desktop) is a free 360 degree video player suppoting 360° videos and photos for Windows and macOS. Just drag and drop your video, you can watch any 360-degree video file at up to 8K resolution and 60 FPS (in Cineform or ProRes). The core controls are all very intuitive that you can just click and drag to look around, spin the mouse wheel to zoom in and out, or tap and pinch on touch-enabled systems. This 360 video player can also recognize and work with your Oculus Rift, as long as your desktop has the appropriate software installed.
Download resource: http://www.kolor.com/gopro-vr-player/download/

As the name suggests, VR Player is also a great application for playing 360 degree videos. It also features reading 2D/3D images, videos and TV shows, local files, streams, discs and more! No lag at all you can appreciate your 360 VR video files like never before and live or relive the moment you recorded with camera.
Download resource: http://www.vrplayer.com/

Key Features:
* Gets you immersed in 360° environments.
* Allows you to enjoy action cam videos undistorted.
* Flexible settings suitable for all HMDs, from Google Cardboard to Zeiss VR One.

Total Cinema 360° Web Player is developed in-house to distribute your 360° videos across web, mobile, desktop, and virtual reality headsets like the Oculus Rift. Built with HTML5 and WebGL, this 360 degree video player operates seamlessly on Chrome, Firefox, and Safari on Windows, Mac, iOS and Android that you can play 360 degree videos at will without device limitation.
Resource: http://www.totalcinema360.com/

How to Play 360 Degree VR Videos with 5KPlayer?

Step 1. Free download 360 video player 5KPlayer on your computer, install and launch it.

Step 2. Click on Video icon on main UI of 5KPlayer, and then choose the 360° videos you want to play on your computer.

BTW, How to Free Download 360 Degree VR Video with 5KPlayer?

Compatible with 300+ online sites including 360 VR video sites like YouTube, Littestar, Vrideo, etc, 5KPlayer is designed to offer lifetime free service to download any 4K HD 360° VR videos movies games in seconds and play them smoothly as well. As an online video music downloader, you can also use it to download any MKV AVI WMV FLV MP4 MP3 AAC FLAC files, movies, TV shows, sports games, etc without a dime.

Step 1. Free download the free 360 degree video downloader for Mac or PC and run it on your computer.

PS: 5KPlayer is under active development to be an outstanding 360 video player among various VR Players that you can play 360 degree videos directly after downloading by just double click the file in the near future. Simple & Smooth!

Best 3D Video Player for Windows and MacRead this review about 3D video players to find the suitable 3D videos player for you to display 3D movies on Mac and PC.

Copyright © 2023 Digiarty Software, Inc. All Rights Reserved.
5KPlayer & DearMob are brands of Digiarty Software, Inc. All other products or name brands are trademarks of their respective holders. All logos, trademarks and images relating to other companies that may be contained wherein are applied in the Internet that are not used for commercial use. Digiarty's software is not developed by or affiliated with such companies.