Disney Movie Company may gradually stand on the year's cusp of film making as it has been releasing many appealing movies in 2015, Macfarland, Cinderella, Tomorrowland, and then Star Wars VII: the Force Awakens, joining LucasFilm and Marvel. Then how to watch upcoming Disney movies free? Apart from top 5 easiest ways to watch Disney movies (VR) online/offline free, we share with you the complete list of Disney movies for your Disney movie schedule.

Disney is recently building its VR app - Steam, compatible with both the Oculus Rift and the HTC Vive. At present, the Disney movie VR App offers fully immersive Disney experience for the themed worlds including Star Wars, The Avengers, and The Jungle Book etc. Free download the APP to take part in that world of wonders.

In 20th century, animated feature films and Hybrid films with live action and animation were the major film products released by Walt Disney Picture. And they are now animated classics worthy of treasuring up for our own childhood memory and some of them can still entertain the children of this generation. To watch Disney movie classics like the Snow White and the Seven Dwarfs, Pinocchio, Dumbo, Bambi, Make Mine Music, Cinderella, Peter Pan, Sleeping Beauty… you can count on YouTube to get them streamed at a little cost.

However, the good news is that Netflix is going to stream Disney movies in September 2016, which would bring the best enjoyment for every one watching on TV screen directly! Are we going to see Star Wars Force Awakens there? What are the Disney/Marvel/Lucasfilm/Pixar movies scheduled for Netflix streaming? We may have to wait a bit longer.

Note: To watch certain Disney movies classics however, like the Little Outlaw, the Three Caballeros, Duck Tales the Movie: Treasure of the Lost Lamp on YouTube may still require payment for for $2.99.

Tips: If you'd like to watch Disney animated movies classics in the lounge with your children as you were once with your parents, the free 5KPlayer would be a wise choice for you to get those Disney movies free streamed to your big HDTV from both Mac/PC.

If you can't find the Disney movies you want to watch, Disney Movies Anywhere is the most direct place to go. There you can find almost all the sources free within certain time limits. You can also go search those best HD movies on the Netflix, Amazon or your Sling TV which has a Disney channel. These three places will definitely provide you with tons of Disney movies that are numerous enough to make you puke. No restrictions in streaming devices and you can use up to 3 devices at a time to watch Disney movies everywhere.

For DVD lovers, you can go to the Disney official website to buy the legitimate DVDs, Blu-ray 4K of any Disney movies you like to watch. Disney movies can all be found here for your safe purchase without worrying about any quality/legal problems.

Tips: The cost-free Disney 4K Blu-ray player -5KPlayer is recommended here for you to play region free Disney DVDs smoothly with best image quality reserved. Also, if you want to have a digital back-up of all those Disney DVD movies you bought, you can make use of a DVD ripper for Windows and Mac to help.

And of course, this method to enjoy Disney movies would be the last to recommend, since they somehow have problems with copyright infringement and viruses/malware. Not very much suggested, yet, if you still desire to try that free way, be careful of your computer and privacy security.

Tips: 5KPlayer offers over 300 online websites for you to find, download and watch Disney movies. With this versatile media player in hand, you can free download many Disney movies not only from online but all the other websites with HTTP streamed Disney movies to watch.

How to Watch Disney Movies Tomorrowland with 5KPlayer?

With 5KPlayer downloaded on your mac/pc, you can easily start on watching Disney movies like Tomorrowland.

Step 1. Find the link of tomorrow land and paste it into the analysis box.

Step 2. Click analyze button and wait for a videostrip showing up below the box.

Note: the same procedure also applies for downloading and watching Disney movies on YouTube and other music videos from Vevo, Instegram, dialymotion etc.

When you've successfully downloaded the Tomorrow Land on your Windows PC/Mac, or you've already bought the Disney movie DVDs to watch, you can stream the movie to your big HDTV with 5KPlayer. But how?

Step 1. Click the AirPlay icon on the up-right corner of the main interface of 5KPlayer.

Step 2. Click Apple TV in the pop-up menu as the AirPlay receiver.

Step 3. Play the Disney movie Tomorrow land on your computer and you can really appreciate this new Disney movie on the big HD-TV.
Note: Do confirm that the Disney movies you want to stream are in the AirPlay supported formats: MOV, M4V, MP4. If not, you can convert the files with a proper video converter. 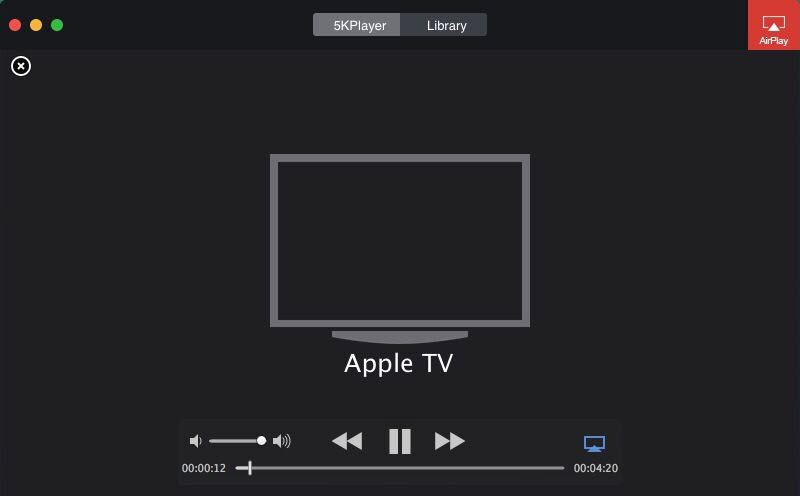 5KPlayer, adhering to its cause of becoming the best video music player to create peerless visual effect, also acts very initiatively towards online video download and AirPlay, solving AirPlay not working problems and resolving AirPlay video delays. Get a 5KPlayer and witness our speedy growth.

Multi Region DVD PlayersRead this article to know which one is the best multi region DVD player for you to spend money on.