How to Solve AirPlay not Working on iPhone/iPad iOS 13?

AirPlay stability now taken to the next stage with a free AirPlay troubleshooting tool - 5KPlayer. Here a to-the point guide could help you out from AirPlay not working on Apple TV, from iPhone (11/XS/XR etc.)/iPad/iPad Pro to Mac/Windows, or even on iOS 13. Just remember "AWRRR".

How to Solve iOS 14 Voice & FaceTime Call Recording not Working >>

Official Clarification: Since Apple has strengthened the "sign & countersign" for AirPlay Bonjour protocol, 5KPlayer for Windows does not support movie/music AirPlay at present.

We have been working hard on AirPlay streaming to figure out a solution. Please stay with us and trust our dedication and efforts! AirPlay for Windows will be back soon!

5KPlayer AirPlay Not Working General Guide: Use this guide if you have AirPlay not working problems from iPhone/iPad to Mac/PC. "AWRRR" refers to the 5 things to do when you use 5KPlayer for AirPlay troubleshooting. 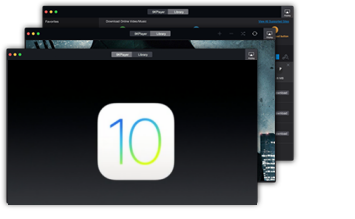 A for AirPlay
Make sure the AirPlay is turned on: Check in iPhone/iPad control center > AirPlay

W for Wi-Fi
Connect your AirPlay sender and receiver to the same Wi-Fi or Ethernet.

Make sure you don't tap "wipe all the content and settings" in your device.
Technically saying 90% of AirPlay not working, or AirPlay icon missing problem could be solved through "AWRRR". But the problem is that you have to watch out at any time in case it goes wrong again at crucial moments.
To help you keep a monitoring eye on the AirPlay condition of your Apple devices, 5KPlayer serves as a sensitive alerting guard in case anything goes wrong in the process of AirPlay. It has indicative AirPlay icon on the main interface that will turn red when AirPlay is enabled, and the playback area could help you in AirPlay troubleshooting.

Comprehensive collection of user feedback shows that AirPlay not working embodies generally in two kinds of cases: the function totally absent, or the AirPlay delays/latency. 5KPlayer provides not only the agile indicator for the function absence by informing the users at once in terms of AirPlay not working, it can also solve AirPlay video delay from iPhone/iPod/iPad Pro to Mac within simple mouse clicks. A whole world of amazing functions is in store at your AirPlay kingdom, and you could really explore how to AirPlay iPhone 11 and even screen mirroring iOS 13 with yourself eligible to solve AirPlay not working problems in daily life.

AirPlay mirroing takes AirPlay one step further by replicating the whole destop of iPhone/iPad/iPad Pro or Mac/Windows to the target device, sending bigger data all at the same time.
If you have problem with AirPlay Mirroring not working properly, disconnect your AirPlay sender and receiver from the Wi-Fi > close all running programs in background > re-launch AirPlay Mirroring.
5KPlayer fixes the screen mirroing unstable problems through working on the wireless streaming protocol. See to this how to use screen mirroring guide for iPhone (11/XS/8/7/SE/6s/6s Plus)/iPad/iPad Pro iOS 13 Mac/Windows and Apple TV, and the special case of screen mirroring iPhone 11 with iOS 13 for corresponding solution.

Guide: AirPlay not Working - Video and Audio Out of Sync [Solved]

Download 5KPlayer for Windows or Mac, install and launch it. This sensitive AirPlay condition guard can seamlessly adapt to your Mac El Captain or Windows 10 to solve AirPlay not working. Here we first focus on troubleshooting Apple TV AirPlay. You could also turn to full guide on how to use AirPlay for guide on AirPlay for Windows, AirPlay from iPad to PC, or from iPhone iPad to Mac..

Step 1: Solve AirPlay not working on Apple TV from Mac/PC

* "A" ->> Make sure the AirPlay sender (Mac/PC) and AirPlay receiver (Apple TV) are in good working mode.
* "W" ->> Confirm that the 2 devices are connected to the same Wi-Fi when AirPlay not woking — sometimes it's just the network.

* AirPlay icon will turn red if AirPlay is enabled, thus providing an immediate indicator for users to solve AirPlay not working. Don't bother with the 3R anymore.

* In the process of AirPlay, your Mac/PC is a flexible controller to Apple TV, it is even capable of volume adjust, fast forward/backward. In terms of video not in sync in wireless streaming, turn to solve AirPlay video delay in a breeze.

Copyright © 2020 Digiarty Software, Inc. All Rights Reserved.
5KPlayer & DearMob are brands of Digiarty Software, Inc. Any third party product names and trademarks used in this website are property of their respective owners. All the related logos and images, including but not limited to Apple's AirPlay®, Apple TV®, iPhone®, iPod®, iPad®, iTunes® and Mac® are registered trademarks of their own. Digiarty is not owned by or affiliated with Apple Inc. and any of those companies.