Since MKV files require a certain MKV player to present their highly-qualified images and exquisite sounds, finding such program is the first task if you want to play HD MKV video files. 5KPlayer, the specifically designed free MKV video player which is perfectly compatible with Windows (7, 8, 10, etc.) and Mac (OS Mojave), is just the ideal one you need for MKV files playback on your Mac and PC. It can help play MKV videos/files, MKA, MKS and MK3D at any resolution, including HD MKV videos, 4K MKV videos and MKV videos at 1920 x 1080, 1280 x 720, etc. No need to install codec pack. No need to convert video formats. This free MKV file player enables you to play anything at ease without troublesome operations beforehand.

To find a suitable MKV player, you may need learning some basis of this format: *.mkv is a filename extension for the Matroska multimedia container format. It is an open standard, future-oriented video file format that is getting more and more popular for high definition videos on the internet, and Matroska has also become a universal format to store high-def multimedia content, such as HD movies and TV shows, attributing to its capability of encapsulating various video, audio, images, subtitle tracks and more into a single file, thus generating MKV files, MKA, MKS, MK3D files respectively and at the same time requiring professional MKV media player to play successfully.

However, most Windows and Android devices don't natively support MKV files, even some big name media players like VLC Media Player fails thereon, and Windows Media Player can't play MKV video without MKV Codec for WMP. Therefore, if you want to play MKV files successfully without messing up with tedious codecs, you need to install a third-party MKV file player. That being said, a free MKV video player named 5KPlayer could be a much-beloved one and can satisfy your demand.

5KPlayer is an emerging multi-purpose free MKV video player specially designed to free play MKV files and other mainstream video formats like AVI MP4 WMV AVCHD MOV. If your favorite video streaming platforms dish out their HD content in Matroska, you won't go wrong with 5KPlayer, which also plays 8K 4K UHD files and MP3 AAC music. Thanks to its straightforward user interface, users of all experience levels can play MKV files easily without headache. You can operate the MKV player with facility no matter you are a newbie or are experienced.

Codec range matters a lot, and for 5KPlayer with ample muscle in it, it easily oversteps its foregoers way ahead. Now that we already know MKV files can pack one or multiple videos, audio/subtitle tracks into a compact unit, it's important to make sure that your file player can read them all. To that point, the free and comprehensive 5KPlayer is the best MKV file player with embedded MKV codec pack you won't regret downloading.

How to play MKV files on Windows 7 is asked more often than on Windows 10, this is because Microsoft announced their operating system level support for Matroska codec under Window 10 in 2015. Without system compatibility, a robust enough MKV player can solve your puzzle the other way round, thanks to its built-in universal codec pack that can exercise from Windows 7/8.1/10 to Vista.

Because the default player Windows Media Player for Windows and QuickTime Player for Mac OS failed to live up users' expectation in MKV video playback, you need to choose a powerful third party MKV player. Here below is a review about the top free MKV file players which you should take into account to play all your MKV files. The review focuses on the media types of MKV (video/audio/subtitle codec) that they support as well as MKV playback problems those MKV video players usually meet. Take a look at it in case you run into the wrong MKV video player.

With built-in MKV codec, 5KPlayer supports all types of MKV files with different V/A codec and subtitle codec, doesn't matter if it is 4K or HD. In addition to playing MKV video on both Mac and PC, 5KPlayer does have a slew of extra feat ures which adds more credit to this best free MKV video player:

However, sometimes when VLC meets H.265 coded MKV files, then VLC can't play MKV and often result in MKV player crashes. In solving this problem, the simplest way is to switch VLC Media Player with the best VLC alternative 5KPlayer, but if you a stubborn VLC fan, you might as well try to convert H.265 to H.264, and then you should be able to play MKV files with VLC trouble free.

GOM Player is a free media player for Windows developed by GRETECH, it supports for Windows XP SP3 or higher. You can customize the user interface and move the functional module as you like or hide them away to keep the interface simple and clear. GOM Player supports various file formats including AVI, MP4, MKV, FLV, WMV, MOV, DVD and Audio CD, but the most impressive thing is the codec finding function can help searching codecs. The only thing you need to keep in mind is that it has the bundleware in the installation file, I had to download another software named GOM audio while installing GOM player.

Except using more than 30 minutes to finish the installation, says DivX Player is one of best MKV video player for Windows PC. This is the player with only very basic video playing feature, supports DivX®, AVI, MKV, and HEVC video files up to 4K. DivX Player of course can play MKV video, but if you want to use it to play ACS, dfx and DTS audio files, you need to upgrade it to the pro version by paying $19.99. But if you do not want to pay for this software, just keep using the free features.

Question - "Why You Should Download A MKV Player with Native MKV Support?"

- What I can only say is to save you from many troubles：
A native all-round MKV codec support in MKV player can on one hand help avoid downloading tons of old, incomplete, broken, buggy or unstable same third-party MKV codecs or codec packs which might overlap each other and burden your computer. It can on the other hand guarantee no codec pack conflicts be made due to mass MKV codec downloads. An efficient MKV video player always has a well-customized complete pack of MKV decoders and keeps your codecs up-to-date through regular updates and self-detections. 5KPlayer generally covers all MKV codecs including the latest VP8 VP9 codecs usually contained in MKV and WebM for UHD videos online streaming.

MKV is gaining its leading momentum in terms of storing unlimited video audios with excellent quality yet requiring relatively low storage space and highly efficient in bandwidth usage. If your player does not support MKV format and relevant codecs, it's time to consider replacing it by downloading the best free MKV player below:

How to Play MKV Files via Best Free MKV Player?

As of now, you have come to the how-to-guide on 5KPlayer MKV playback, MKV conversion, MKV streaming and Windows 7 MKV trouble shooting. Free download this best MKV player and launch it first before picking any of the tutorials below to lead you through the tunnel.

This free MKV file player will instantly response to your instruction and playback the MKV video in seconds.

An MKV file player with MKV file download convert utility is surely what you should try.
a. Visit 300+ online MKV video sites and copy the URL of the MKV vid you want to download
b. Click YouTube button on the main window, click analysis
c. Click "Download" button to save the MKV file.
You can choose target download format and resolution by tapping the Gear icon for preset so as to save the originally non-MKV files as MKV directly.
To convert MKV to MP3/ACC or MP4, simply locate the video in Library first and click the "Convert" drop-down box.
For more advanced MKV conversion purposes, you might want to get a professional MKV video converter for Mac/PC.

Well, sadly, Apple TV AirPlay does not support .mkv extension files. It only supports video in MP4, M4V and audio in MP3. So here you will need some workarounds regarding MKV streaming matter.

AirPlay mirroring from Mac to Apple TV, provided that you have a Mac in first place. 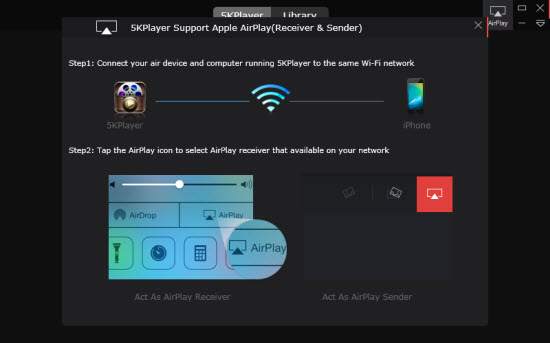 The major reason why Windows 7/8 does not support MKV file container relies on its default Windows Media Player. The default version of WMP on Windows 7/8 does not have a demuxer supporting MKV container, leading to all the audio/video/subtitle etc in MKV not being demuxed into individual signals before decoding respectively. This problem can be solved by downloading codec packs like K-Lite or CCCP, but as said earlier, great MKV players for Windows 7 should at least get MKV playback requirements ready in an all-round manner and well-customized for its overall performance. Adopting a third-party pack can cause you many unwanted troubles. And that's why we would like to recommend you 5KPlayer as one of the most sophisticatedly well-designed MKV video player to play MKV files.