DLNA, a streaming media technology often compared with Apple's AirPlay utility, will reveal itself to us all today on the fact of DLNA screen mirroring. From the ability of media streaming to screen mirroring, we none-Apple users thought we've got a 100% copy of Apple's streaming solution using DLNA, but the fact is otherwise correct.

5KPlayer turns your Windows PC/Mac computer into a free media server that can be accessed from the TV end. Your PC stored videos, movies, photos, songs can be directly played back on a bigger screen without migration or changing storage path.

What is DLNA designed for?

DLNA, to an extent, is an early born as a part under the concept of internet of things(IoT), yet focusing on local media sharing only. With media devices supporting this protocol, their contents/storage are connected wirelessly - computer, smart tv, phones, tablets, printers, storage server. These devices can be bestowed with functions of a media server, a media data receiver, a sender, a fetcher, to wirelessly fetch content on one device and play it on another, while remaining the current storage status. No physical storage migration is needed.

For instance, it enables your smart TV to play music, photos and videos including .MP3, .JPG or .MP4 from devices like your Windows computer and Smartphone.

To simply put, DLNA is local media-based protocol for wireless fetch and display. If you are watching an online video from YouTube, DLNA can't let you stream the content to TV. However, by using 5KPlayer as a DLNA server, you may first download YouTube videos and then stream medie from PC to Android TV. Check how to turn Windows 10 computer to a DLNA media server.

Before we talk about DLNA screen mirroring, lets talk about the mechanism of screen mirroring. No matter for AirPlay mirroring or Miracast mirroring, what they do here is to record the screen in like H.264, and push the recorded video stream to the target display. Therefore, some developers believe that obtaining several screenshots per second and directly stream them via DLNA can achieve DLNA screen mirroring. But the trouble is, without encoding, those great amount of original screenshots will cause too high a level of traffic to stream via WIFI. Also, VNC-like screen mirroring methods requires root permissions to fetch framebuffer for streaming, so that there will be no sound and totally unefficient.

No matter for media streaming or screen mirroring, AirPlay technology is fo cused on Apple ecosystem only. For more universal usage, one might as well select Miracast for mirroring and DLNA for streaming.

DLNA Can't Mirror PC Screen to TV, But 5KPlayer Can

At present, the screen mirroring utility of 5KPlayer is acheived via AirPlay tech only.

Step 1: Get 5KPlayer and launch it for your PC/Mac

Make sure that your devices are connected the same WIFI network.

Step 2: Click to activate AirPlay on the up-right corner of the interface. Choose your AirPlay enabled TV. And that might narrow down the choices to Apple TV.

Step 3: Once activated, your screen of the computer will be beamed onto the TV through Airplay Mirroring.

Note: 5KPlayer also has support for streaming desktop to tv via DLNA, making your computer a DLNA controller, a DLNA receiver and even a DLNA server for any DLNA supported devices to access. 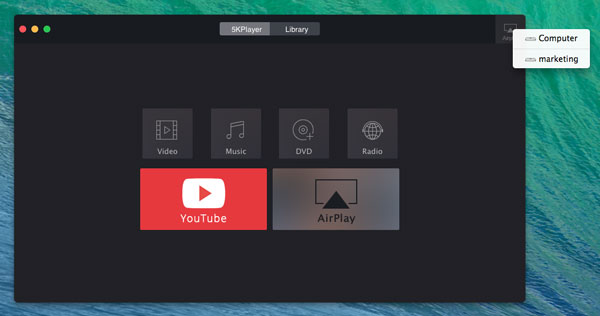 5KPlayer can be the most reliable streaming media player to offer AirPlay screen mirroring solution for Apple users and stream PC to Xbox if you have an Xbox One/360 console. But for those outside of Apple ecosystem who wish for screen mirroring utility, this DLNA/UPnP player is not your answer, but Miracast. However, as long as you are holding an iOS device and looking for iOS screen mirroring to Windows and macOS Mojave, 5KPlayer can be very helpful.

Best DLNA Apps for AndroidBest DLNA app for Android is prepared here for DLNA streaming Android phone to PC and DLNA-certified smart TV at will.

Free DLNA Media ShareThis guide will teach you how to DLNA file sharing from Android to Windows PC and PC to TV wirelessly.