For Apple users, using AirPlay 2 to stream music songs to AirPlay 2 speakers is like a solide evolution. But to DLNA users, it might not sound that dazzling as we have already been using that kind of "multi-room audio" streaming for some time, and better off, we even got "multi-room video" streaming. How to stream video music without AirPlay 2? And what is the Android AirPlay 2 equivalent? Your will find it here.

This free DLNA streamer - 5KPlayer, can serve you as AirPlay 2 for Android and let you stream audio and video to different devices simultaneously! Far better than AirPlay 2, this DLNA player is not limited to multi-audio streaming from iOS 11.4, but also multi-video streaming. Download this free Android AirPlay 2 alternative!

AirPlay vs AirPlay 2 vs DLNA

The major difference between AirPlay and AirPlay 2 is that the latter introduces a killer feature for audio streaming - offering multi-room audio, which means that you can play back different songs in different rooms with multiple speakers simultaneously. Users can also easily control each AirPlay 2 receiver devices from the control center as a central wireless controller. As for streaming videos, the two AirPlay versions are basically the same - one-on-one device video streaming for bigger screen enjoyment. AirPlay only wins over AirPlay 2 at supporting older device models.
Verdict: AirPlay 2.0 is an obvious upgrade on AirPlay 1.0, but if your devices are incompatible with AirPlay 2 protocol, none of the advantages matters.

DLNA provides wider device support and freedom for video audio streaming than AirPlay 2 for Android and other none Apple devices. For a long time already, DLNA server utility can let users play back different songs and movies in different rooms with multiple devices simultaneously. DLNA server utility turns your PC into a media server so that stored songs, movies can be accessed from different speaker, mobile devices and TV sets. Yet AirPlay 2 can only realize the audio part. A lot of DLNA supported speakers, clients, renderers including AT&T, Broadcom, CableLabs, Cisco, Comcast, DIRECTV, Dolby Laboratories, DTS, Ericsson, HP, Huawei, Intel, LG, Microsoft, Motorola, Nokia, Panasonic, Samsung, Sharp, Sony, Technicolor, Toshiba, Verizon, have support for this protocol and are not restricted to Apple ecosystem. The only defect of DLNA streaming compared to AirPlay 2 is that the former cannot simultaneously control all the connected devices at one go.
Verdict: AirPlay 2 cannot compete with DLNA over different video simultaneous streaming.

To use AirPlay 2 you will have to meet three requirements, i.e. an iOS 11.4 iPhone/iPad device + an AirPlay 2 speaker + same WIFI connection. When the AirPlay 2 sender and receivers connected the same WIFI network, your iOS 11.4 device will auto-detect all the receivers for audio streaming.

However, do remember that iDevices including only the iPhone 5S, iPad Air, and iPad mini 2 can update to iOS 11.4. And the iPhone 5 and 5C, as well as iPad 4 and the very first iPad mini, are not supported by iOS 11.4. Also note that Apple TV when running tvOS 11.4 (4th & 5th gen) can receive AirPlay 2 protocol. This might rule out a lot old iPhone users to enjoy new AirPlay 2 new features.

Step 3: With AirPlay 2 sender and AirPlay 2 audio receiver at hand, provided that they both connected the same WIFI network, you can start using AirPlay 2 to stream music songs from iOS 11.4 devices to target speakers simultaneously and control them separately.

Just open the AirPlay 2 speakers and go search those speaker from your iPhone/iPad iOS 11.4 devices. Tap to connect them all for audio streaming via AirPlay 2 for multiple rooms.

5KPlayer is your best Android AriPlay 2 equivalent to turn PC into a media server, a DLNA controller, and a DLNA renderer/player. It lets your multiple DLAN devices access the central media server to play back different audio songs and movies from separate rooms. It is also by far the most user friendly DLNA streamer to support video audio playlist streaming and playback in loop. Stable, multi-device seamless streaming make 5KPlayer a great equivalent to AirPlay 2 for Android.

Step 2: Connect all your DLNA devices to the same WIFI network.

Step 4: Click on a movie/song or a whole playlist for seamless playback. 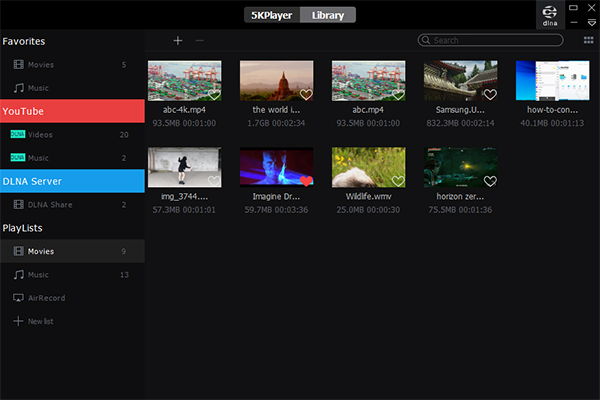 This Android AirPlay 2 streaming software also allows you to free download endless music videos from online to build up your own media hug for free streaming. Your Android mobile devices will be able to remote control and stream video music directly to PC for 4K/8K HDR playback, as well as fetching media from PC end. Get this streaming media player now for your Android device as AirPlay 2 alternative!

How to Stream Video and Audio?Learn how to stream videos, movies, music from iPad iPhone to Mac with the superb streaming player 5KPlayer.

How to Stream Films on iPad to Mac/PCHere a hassle-free way to stream movies on iPad to both Mac OS and PC with an all-in-one AirPlay server is shared.